Skip to main content: Amabrush – Vacuum casting – to the extremes

Amabrush
Vacuum casting – to the extremes

The idea is as simple as it is ingenious – a device to brush your teeth in ten seconds flat. To help the startup Amabrush implement this idea, 1zu1 pushed the limits of vacuum casting.

What if you could brush all of your teeth at once? This was the question that preoccupied Marvin Musialek when he developed the first prototype for the ten-second toothbrush. The components: a vibration motor, a boxer&apos;s mouthguard and false eyelashes as replacement bristles. Marvin Musialek, founder and CEO of Amabrush, proceeded to cause an international sensation with his idea. In our interview, 1zu1 project manager Raphael Madlener and Marvin Musialek describe how the collaboration came about and which challenges had to be overcome.

Mr. Musialek, could you briefly explain your invention to us?

What were the next steps after your first self-built prototype?

Marvin Musialek: Following our first attempt with a mouthguard and eyelashes, we produced the second version of the mouthpiece with an FDM 3D printer. These cheaper printers melt the plastic at certain points and therefore make it relatively brittle. Also, the resolution is too low to map the fine structures of the bristles. So it was clear that we needed a professional prototype.

How did you learn about 1zu1?

Marvin Musialek: At the beginning of 2018, we searched online for an experienced partner. We came across 1zu1. We were impressed by the company's range of manufacturing processes and highly professional appearance, and so we reached an agreement.

What part did 1zu1 play in this?

Raphael Madlener: We printed the Amabrush mouthpiece using Selective Laser Sintering (SLS). In this process, the plastic powder is melted in layers. The component thus becomes firmer and the geometry can also be finely printed due to the fine laser diameter of 0.42 millimeters and 0.1-millimeter-thick construction layers. After this design prototype, the aim was to manufacture the mouthpiece using a process that was closer to series production and that could also produce soft components. For this reason, we decided in favor of vacuum casting.

What were the challenges?

Raphael Madlener: There had to be channels running through the mouthpiece in order to transport the toothpaste to the bristles. In vacuum casting it's not easy to keep these channels free. The solution was to divide the Amabrush into quarters! For production, we separated the mouthpiece into a mouthplate consisting of two identical halves and two identical bristle parts, one for the top and one for the bottom. The four parts had to be glued together after casting, so we chose a tongue-and-groove construction for the channels in the mouthplate. This prevented unwanted penetration of glue. Due to the symmetrical construction, only two tools were necessary: one for the mouthplate half and one for the bristle part.

What was the next step?

Marvin Musialek: We thought it was a good solution and incorporated the new findings into the design.

Raphael Madlener: With this new design data, we printed two master models, optimized the surfaces and produced the molds for vacuum casting. Another challenge arose during the casting of the bristle part. We had intended to use PU rubber as the material. However, we weren't sure that this relatively viscous rubber would penetrate all the way into the tips of the fine bristle geometry. At this point we benefited from the long-standing experience of Herbert Hintner, head of our vacuum-casting department. He tinkered with the process until even the smallest tips in the negative mold were filled with material. The bristle parts were manufactured in two different Shore A hardnesses – 45 and 65 – for test purposes. Afterwards, we glued all parts together and integrated the supplied magnet.

Marvin Musialek: We needed twenty fully functional mouthpieces to take to a trade fair in February. After two weeks, i.e. one week earlier than planned, we received the mock-ups from 1zu1.

Besides the mouthpiece, did 1zu1 assist you with the development of any other components?

Marvin Musialek: We designed a representative and functional case as travel packaging for our product. This was also printed by 1zu1 using the SLS process.

Raphael Madlener: The case consists of two shells, which are connected by an inlay. The inlay has a film hinge to close the whole thing. The trick was to print the film hinge horizontally so that it has the required elasticity and does not break when the case is opened and closed. After printing, we painted the inlay in Amabrush's chosen color.

How would you summarize the collaboration?

Raphael Madlener: The work requested by Amabrush was something of a sporting challenge that we gladly accepted. Our wide repertoire of possibilities, materials and production techniques proved to be of great benefit to us.

Marvin Musialek: The communication with 1zu1 was professional and brought us significantly closer to our goal of revolutionizing tooth brushing.

Interviewed: Marvin Musialek is the founder and CEO of Amabrush. Raphael Madlener is a project manager at 1zu1 in Dornbirn. The interview was conducted by Werner Sommer; photos by Darko Todorovic. 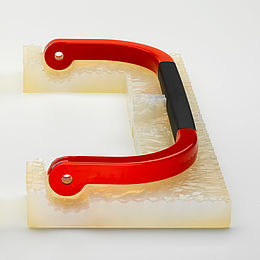 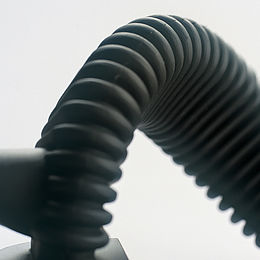 Vacuum-cast silicone
Elastomer components from 10 to 65 Shore A