BerninaPre-series production with Alutools - injection molding as fast as possible

Sometimes only the original is good enough – even for the prototype. BERNINA developed a new bobbin case for a sewing machine – an intricate, high-tech plastic part that rotates at one thousand revolutions per minute. To realize the design by means of injection molding, 1zu1 Prototypes built an aluminum tool. Despite two iterations, the bobbin case was made a reality in just four weeks.

Whenever the project consultants at 1zu1 receive a request, their goal is always simple – to understand what the customer really needs. Our collaboration with the Swiss sewing machine manufacturer BERNINA began with a request to manufacture some chassis parts via Selective Laser Sintering.

BERNINA 790, from the innovation and quality leader in household sewing and embroidery machines

Sales manager Thomas Kohler dug deeper. What requirements does the part really need to meet? What are the optical and functional requirements? How big are the tolerances?

The proposal that was ultimately put forward by 1zu1 Prototypes involved 3D printing using Fused Deposition Modeling. This approach resulted in less warpage than with laser sintering and ensured that the cladding parts fitted together perfectly. Kohler speculates that: „As a result of this initial consultation, we won the customer's trust.“ „BERNINA realized that we are a competent partner that not only executes orders, but really thinks about what they need.“

So they quickly got down to business. In this particular project, they need us to produce a bobbin case – a plastic part with extremely challenging requirements. BERNINA's development manager, Patric Könner, and Wolfgang Spiegel, product manager for Rapid Tooling at 1zu1 Prototypes, describe the extraordinary challenges this involved.

Mr. Könner, injection molding is rarely used in the construction of prototypes due to the excessive costs and long lead times. As head of development at BERNINA, why did you nevertheless have this bobbin case produced via injection molding?

Patric Könner: The bobbin case is a high-tech cylindrical plastic part with a diameter of almost thirty millimeters and a height of less than 20 millimeters. The wall thickness is less than 0.5 millimeters at the thinnest point. When sewing, it rotates at one thousand revolutions per minute and ensures that the thread is unwound evenly with the desired tension.

For our 7-series, we developed a bobbin case with 70 percent more capacity. We needed a working prototype that was as close as possible to the subsequent production part. Normal prototype processes are not sufficient for this kind of high functional density. That's why we immediately decided on injection molding.

Wolfgang Spiegel: It's unusual to recreate the real operating environment during construction of a prototype. However, it quickly became clear that the material, surface and dimensional requirements could only be met with the original materials. BERNINA listed no fewer than 28 demanding specifications in the design drawing – and we had to comply with each one, starting with the prototype. Ultimately, if I really want to simulate series production, then I have to choose the series-production method.

Könner: I also see it as an advantage that our developers have to design for injection molding right from the start, i.e. for the subsequent series-production process. This means they have to consider the possibilities and limitations of injection molding. From the outset, they have designed parts that are suitable for plastics, and that can later be produced in series via a reliable process.

How can injection molding be used to build a prototype without an explosion in terms of time and costs?

Spiegel: The first two iterative steps were completed by means of 3D printing. At the same time, we built the tool. We're relying on modular aluminum tools that can be manufactured quickly and allow subsequent changes to be made. After three weeks, the customer received the first injection-molded parts.

Könner: Speed is an important factor for us. The aluminum tool is not only quick to build, it can also be easily adapted. This allows us to tune it relatively quickly and cost-effectively, and get close to series production.

Spiegel: We construct the aluminum tools in a modular manner. In the design department, we dismantle the tool until each individual part can be turned and milled. Our superlative machinery lets us manufacture tools with extremely small tolerances. After the first shot in injection molding, we measure the produced parts and can still correct the tool if necessary.

Can you describe the development process for this project?

Spiegel: We needed to understand what the customer really needs. For the exterior cladding parts the priority was dimensional accuracy and appearance. For the bobbin case, only the technical functionality was relevant. Internally, we immediately called in our tool designer to clarify what we needed to do to realize these tight tolerances with an aluminum tool.

So we decided on an automatic tool, because the thermal load in a fully automatic machine is different from that with manual tool removal. And because we built the tool in logical and sensible parts right from the start, both of these development steps in the project were completed in just a few days – including modification of the tools and production and delivery of the next parts.

As a customer, do you also benefit from 1zu1's experience with the aluminum tool?

Könner: Of course! We can optimize undercuts and the arrangement of sliders for demolding and so on from the very beginning. Our employees here acquire expertise that helps us later on with outsourcing. The experience gained is incorporated into the development of the series tool. This enables us to get to the end product in one shot. Changes to a series tool would not only be incomparably more expensive, the quality of the parts would also suffer.

How did the exchange of experience between 1zu1 Prototypes and BERNINA work in practice?

Spiegel: For us, the decisive factor is face-to-face discussions with the customer. We bring extensive knowledge of our technologies to the table. The customer contributes their many years of experience. This know-how from both sides must be pooled. With everyone sitting around the same table, well-informed decisions can be made very quickly.

Könner: I value this dialog, which takes place on an equal footing. The experts from 1zu1 repeatedly gave us suggestions as to how we could solve a particular problem in a different way. We also like to learn from them.

After all, they had even produced several thousand pieces of the bobbin case using the aluminum tool.

Könner: With such a small series we can postpone the decision on the production of a series tool until we're practically certain the series release will follow. Even the time until the series tool is ready can be bridged using the aluminum tool. Some of the BERNINA 7-Series machines were used for initial market tests before the product went on sale.

Interviewed:
Patric Könner is head of development and Vice President of the Swiss sewing machine manufacturer BERNINA International AG. Wolfgang Spiegel is a product manager for Rapid Tooling at 1zu1 Prototypes in Dornbirn. The interview was conducted by Wolfgang Pendl; photos by Darko Todorovic. 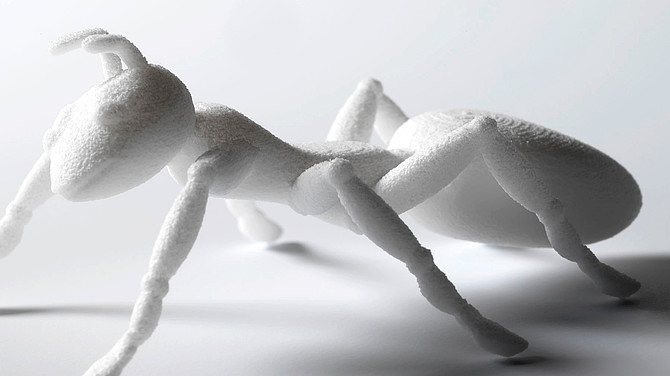 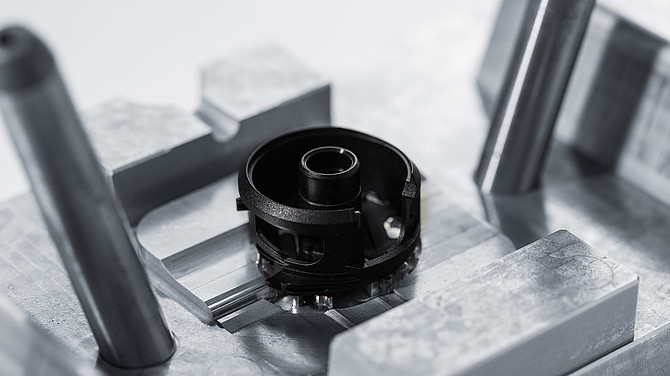 To the blog
Know-how